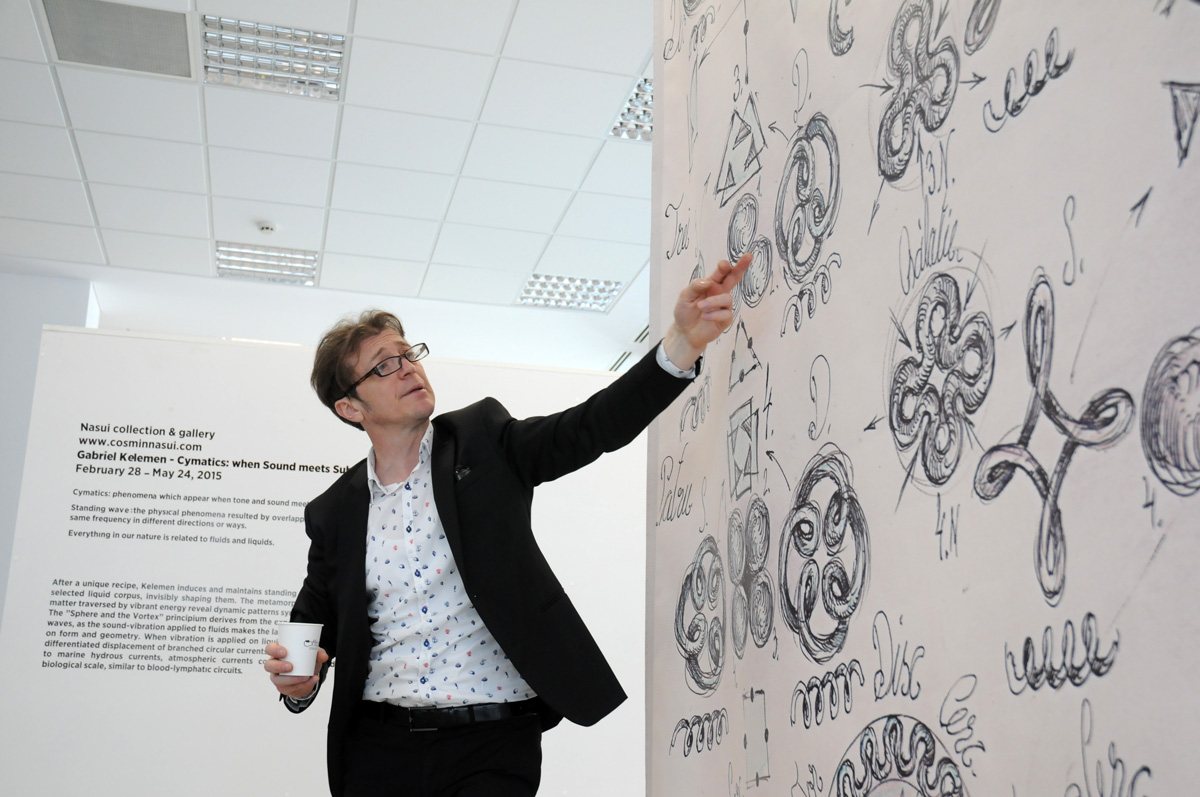 The event will consist of a talk about Cymatics, generative art, sculpture as design held by specific curators and of an interactive presentation of the TED material of Evan Grant: Making Sound visible through Cymatics.

Cymatics: phenomena which appear when tone and sound meet the substance

Standing wave: the physical phenomena resulted by overlapping two waves of the same frequency in different directions or ways.

Everything in our nature is related to fluids and liquids.

The study of the geometry of liquids and stationary waves is in the centre of the artist and researcher Gabriel Kelemen’s work.

To explain his lengthy and thorough researches on the dynamics of standing waves and the ”Universal Sphere-Vortex Principium”, Gabriel Kelemen uses art. The practice of these experiments has taken over 15 years and the results are emphasizing the complex mechanisms beyond it.

The ”Sphere and the Vortex” principium derives from the experiments on standing waves, as the sound-vibration applied to fluids makes the latter become dependent on form and geometry. When vibration is applied on liquids, there takes place a differentiated displacement of branched circular currents that rotate. This is similar to marine hydrous currents, atmospheric currents convections and, down to biological scale, similar to blood-lymphatic circuits.

The exhibition ”Cymatics: when Sound meets Substance” , prepared by Nasui collection & gallery in Bucharest, unfolds in four stages which are corresponding to different angles of Gabriel Kelemen’s study: drawings, sculptures, digigraphies and video.

Kelemen uses the means of photography and filming to record, in macro-mode, his laboratory experiments in the liquids worlds. The main purpose of these tools is both documenting and engaging the audience into the world of Cymatics, but the results are surprisingly defined as generative art. The exhibition hosts several digigraphies and a video room.

The exhibition displays a series of unique drawings, that act like an illustrated decoding for the ”Universal Sphere-Vortex Principium”. Each plate is revealing one aspect of this theory after the other, thus making a complete circle: enunciation, demonstration and Q.E.D. The plates are meticulously organized as maps, including written explanations and notations.  In tones of sepia, to ensure the chromatic coherence of the entire visual discourse, the drawings also hint at and bring to mind the world of academic, philosophical studies.

Kelemen’s sculptures are actually the result of ”freezing” the liquids’ movements and energetic vectors in certain volumetrical stages, during long generative progresses. The evolution of these essential mathematical entities reveals marvellous and unexpected processes of the organic life and organic nature.

”Sound visualization is one of the ancestral human dreams. Capturing the image of the ephemeral sound still concerns scientific environments. Almost everything in the universe is in a state of vibration.” Gabriel Kelemen

The Cymatics: when Sound meets Substance exhibition is accompanied by a book.

Gabriel Kelemen is an artist and researcher. He teaches at the West University of Timisoara (Romania). He is one of the recognizable global representatives of Cymatics, including TED. In long-term studies, he has found his very own way into this discipline. In addition to observation, Kelemen’s artistic understanding and penetration of the world of Cymatics are made through drawings, videos, photos and sculptures.

From significant revelations of the geometrical content of the shapes, Kelemen moves on to the complex representations of the nature. After profound study of macro universe, spheres and spirals and their presence on all levels of reality (magnetic fields, ocean currents etc.), Gabriel Kelemen turns his investigation towards the human body (bones structures, bloodstream etc) and the micro universe (cellular division).

The term Cymatics (kyma – the Greek word for wave) was influenced by the anthroposophical doctor gestalt biologist and artist Hans Jenny (1904-1972) in the 1960es. Under this term, he summarized all phenomena which appear when tone and sound meet the substance. One of the first who discovered these phenomena was Ernst Florens Friedrich Chladni (1756-1827). The Chladni sound figures, named after him, are the sand figures that neatly arrange themselves in the sound on a plate, set into vibration with a violin bow.

Hans Jenny understood how regularities of development are shown in the sound figures and point to the organization and the work of the formative forces.

More and more researchers and groups are dedicated to the subject of Cymatics. Results of spectacular experiments make the phenomenon visible, pointing us far beyond the limits of a purely materialistic philosophy.