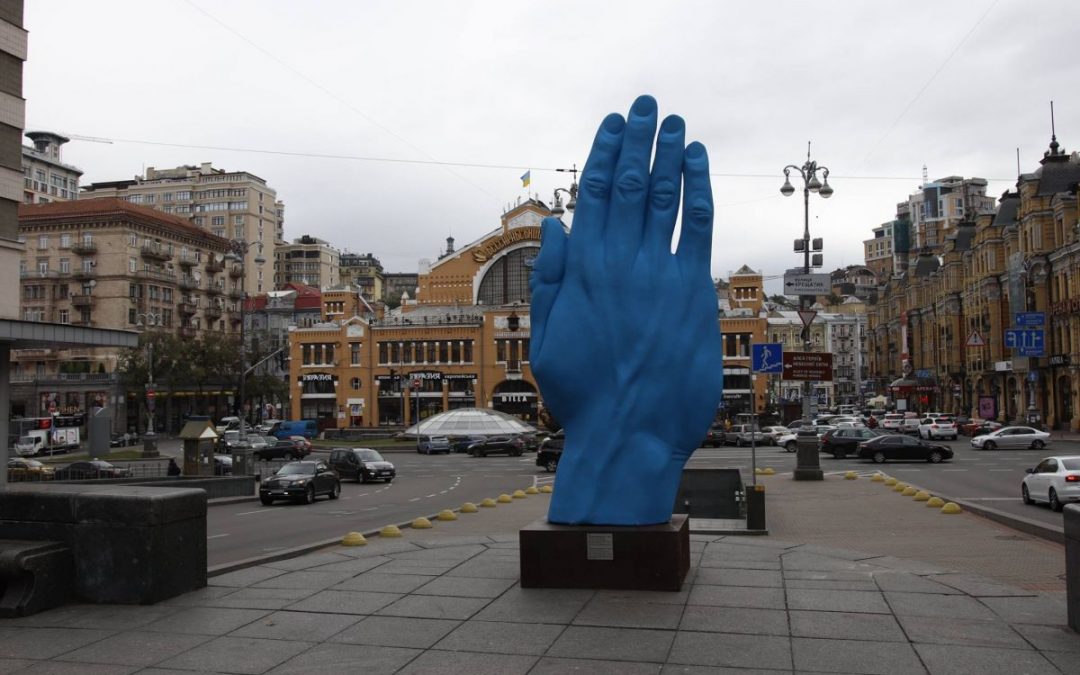 I choose to give this statement because of all questions and comments made on my works which are part of the project Moving Monuments Kyiv. I believe the role of art is to make people think, talk and express their opinions. Social media is a good space for people to take out their comments – well, sometimes they are mean, or unpolite…but we, as artists, take this risk.

My artworks follow my interest in mixing body parts and use them as symbols: gestures, positions of the body – there is a whole language of those and people are not always aware of this.

I think it is very important for an artist to be exhibited in very diverse cultural spaces, as they find out more and more about the people. Moreover, the artists have to travel, to see a lot of creative things in order to keep their creativity alive. For all the projects of exhibitions I work with curators, art historians, including the art biennale in Liverpool, Venice, galleries in Paris, Tel Aviv, New York and also museums in Romania (The National Contemporary Art Museum in Bucharest, Sibiu Brukenthal Museum, Art Museum Timisoara).

I am very glad that my artworks (Middle Way and View from Light) are in Kyiv. I think it is a wonderful city, with a strong identity and a vibrant art scene.  I believe Ukraine is fighting for its peace and a prosperous future and I am confident that art and culture can help!

I am open to all art proposals, as there is not only the city but also the context where my sculptures are placed, and the context is very important, it is about history, identity, art.

It is very hard for an artist to work, teach and manage all the details of a project, including communication! So usually, my works are proposed to different exhibitions, biennales, cultural centres and my curator takes care of the everything, finds grants and sponsorships.

My artworks in Kyiv are part of a larger programme, Moving Monuments, developed since 2014 by Nasui collection & gallery, where they travel sculptures to cultural spaces, heritage spaces in Europe. The programme has different parts. One sculpture of mine is part of „Middle Way” and the other, ”View from Light”, is from the part named „the Memory of Resistance”, dedicated to the ones who fought and died because of their beliefs during communist times.

I created the artworks in 2014 (Middle Way) and 2017 (View from Light) and Nasui gallery has developed projects with them. It can take months to do works like these and we cover the costs of production. So if someone wants to buy my artworks for their collection, they should definitely talk to the gallery.

View from Light was placed in an ex-communist prison in Romania, now a memorial (Ramnicu Sarat Silence Prison) in 2017 and then it was travelled to Bruxelles European Parliament for an exhibitional event during Plenum of the Parliament in spring 2018. Now, View from Light is placed in the proximity of Romanian Embassy in Kiev.

Middle Way stands in Kyiv on its own pedestal, near the socle where once the Lenin statue used to be – so no replacement :). My work is a symbol of peace and tolerance and  actually I am glad that its location in Kyiv makes people so passionate about …contemporary art in their own city! Symbolism is a very powerful tool in order to get to people.

The place of the sculpture was carefully selected by the Kyiv City and Shevchenko Raion authorities in cooperation with with the curator Cosmin Nasui, the Romanian Embassy in Kiev, with the Ukrainian Ministry of Culture. The project is about about freedom of expression, about European values.

I have created Middle Way on the occasion of Nasui collection & gallery pitch and win for entering Independents Liverpool Biennial in 2014. I chose the color red then, because of the idea of being seen as a landmark – it was placed in the museums island in the city, on an UNESCO heritage site – St. George`s Hall.

Then the hand was invited in Baia Mare, my birth town, because the town was entering a bid for being an European Capital of Culture in 2021. And it was placed in a heritage space as well (Piata Cetatii).

Then, on the occasion of celebrating 100 years of bilateral relations of Lisbon-Romania, Cascais and Porto invited Middle Way to be hosted in some spaces with great visibility.

The red color was kept from Liverpool.

In Kiev we have decided to respect Ukraine`s flag and its European values and make it blue.

At the beginning of the creation of Middle Way I have agreed with Cosmin (the curator) that placing an imposant artwork in the public space is automatically drawing a lot of attention: comments, photos, check-in etc. At Liverpool for example it was a whole wedding group that came to take pictures with it, there were kids all the time there. In Porto it was the one and only Nick Cave who took pictures with him and the hand, because he had a concert at Casa da Musica where the hand was placed and he had a song called „Red Right Hand” which is the tune theme of the series ”Peaky Blinders”…So you see how culture and art has its ways to impact people!

In the end I say that we hope to stay long enough in Kyiv for all the people to express their opinions, including the Ukrainian. Then I hope it will travel in some of Ukraine`s cities who are interested in talking other languages with their citizens – for example the language of art and symbolism.