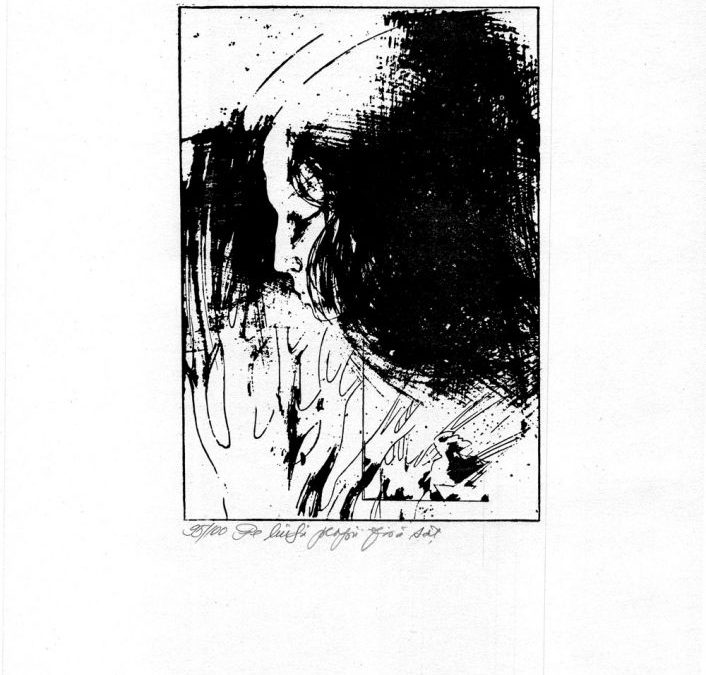 Vasile Socoliuc was born on August 7, 1937, at Tisauti, Suceava County. After taking courses at the Fine Arts School in Bucharest, he attended the N. Grigorescu Fine Arts Institute, graphics department. He worked as a graphic artist with the Publishing House for World Literature, Bucharest. A member of the Union of Fine Artists of Romania, he participated in several national and international exhibitions, salons, and arts biennials. He created at least 1,500 book and series cover designs (Contemporary French Theater, Classics of World Literature, illustrated books Stories about a Fisherman and a Fish by A.S. Pushkin, The Hatchet by Mihail Sadoveanu), as well as posters (for instance that for the movie Andrej Rubliov), hosted now by the Willanow Museum of Warsaw. He was awarded various prizes (for best book graphics) and distinctions (Cultural Merit, group C, order Knight, merit diploma, bronze and silver medals, etc.)
Vasile Socoliuc is an artist who asserts a genuineness of vital, prevailing forms in his compositions, where lines are as immaterial as black spots are accented. This breeds a world of contrasts apt to reveal him as a creator of imponderable essences, instinctively poised, of images haunted by the restlessness of characters that seem to oppose all fear and humiliation. Something always takes place in the graphics of this balanced judge: anxieties are sublimated, withdrawn, remote from what is easy or picturesque, bordering (out of a natural desire for the epic) on the anecdotic, suggested and assumed without premeditation, therefore specific to graphics to a certain extent, and integrated into an aesthetic system developed at any risks, even that of becoming encrypted in a mystery never quenched, to be satisfied by consuming a single kind of fuel – the line – and its support of seemingly accidental lines. Standing like broken pieces of rocks from the layers of the earth crust, brought to the surface by landslides, the compositions of Vasile Socoliuc are diagrams of his life, pulsating with well-auguring events, his personal experience about human passions. His animals are more or less weird, watchful of what is happening to people, taking over or conveying ruckus and strife, like in a cat-dog relationship. The grave epic of his graphics evolves within the limits of dog and cat lives, between faith and blandishment, hypocritically offered warm softness, and the opposite, endurance, withstanding whatever may come, at any burdensome cost. Hence the fierce nature of his compositions, some characters expressing the very relentlessness of resignation. All these are, in fact, abstractions about the real and acute concrete representations of the imaginary, perceived as an emotional prolongation of reality, mirrored two or three times. Having perhaps fallen prey to the many texts he illustrated (and interpreted therefore), the graphic artist allows himself to be ensnared by the secret code of his own life where he interprets only himself. He emerges thus as an artist of his times, which he perceives and understands, while also delving through the psychogenic web of his lines.