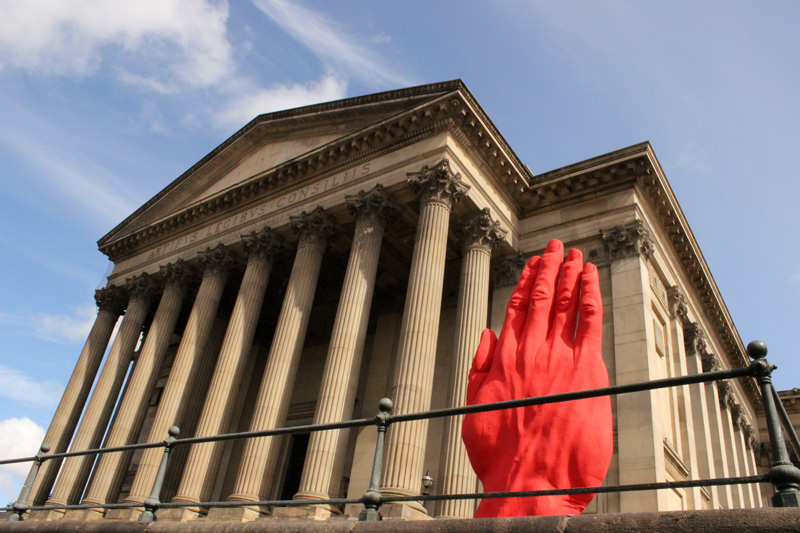 A monumental sculpture made by the young artist Bogdan Rata is being placed in front of St. George’s Hall within Independents Liverpool Biennial 2014.

The sculpture is 3,5 metres high and it is called ”The Middle Way”. This project is part of Moving Monuments, a programme by Nasui collection & gallery.

Bogdan Rata is one of the most intriguing sculptors from his generation. His new hybrid realism is finding new genetic forms of human anatomy in search of a new posthumanism. Rata multiplies human parts (fingers, ears, and so on) and combines them into new life forms. The newborn creatures seem to result from strange experiments on human bodies in an esthetics lab. Rata’s works forge a contextual change of the anatomic detail through its obsessive multiplication. The materials used, and the resulting industrial look, question the assault on individual personality in a climate of commercial branding uniformity.

Bogdan Rata is particularly interested that his works surprise fear, confusion, uncertainty and corporal disorder. ”I work with human fragments which I combine in order to create images with a strong emotional impact: frustration, fright, shame. I reinterpret the human body precisely in order to induce a state of confusion to the reader and to in a way force him to understand, from a different perspective, the contemporary human being. A finger can be stronger than a rifle, an ear more frustrating than an interrogation.” (Bogdan Rata) He uses new materials as polystyrene, industrial paint, plaster, synthetic resin.

Bogdan Rata is an artist, PhD at Timisoara West University (Romania), with a thorough research on new materials in contemporary sculpture. Rata lives and works in Bucharest and Timisoara and is represented by Nasui collection & gallery (Bucharest, Romania). He was exhibited in many prestigious spaces and events, among which Moscow Biennale 2011 and Venice Biennale 2013.

Nasui collection&gallery is a cultural operator presenting the most important premium creations of a carefully selected pool of Romanian contemporary artists, within favourable international and national contexts. It aims to circulate its artists and art works on national and international art markets and scenes and to contribute to the sustainable growth of the represented artists’ market values.

St George’s Hall Liverpool is a Grade 1 listed building at the heart of Liverpool’s cultural quarter, part of a UNESCO World Heritage Site. It’s widely regarded as one of the finest neo-classical buildings in the world and was described by Nickolaus Pevsner as ‘the finest neo-Grecian building in England and one of the finest in the world.’ Former poet laureate Sir John Betjeman listed the building among the 10 he would die for and viewed it as ‘the finest secular hall in England.’ http://liverpoolcityhalls.co.uk/st-georges-hall

The Romanian Cultural Institute in London, or ICR/RCI London, is part of a global network of cultural institutes and together we make up Romania’s main arm of cultural diplomacy. Since its opening, the Institute has organized over 400 events in its home on Belgrave Square London and throughout the UK http://www.icr-london.co.uk/