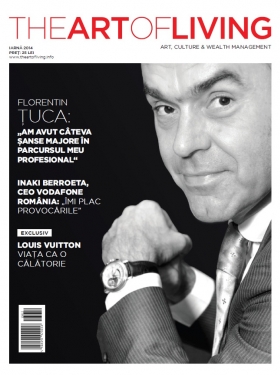 You are an art historian, artist, cultural manager, founder of the popular website of contemporary culture and gallerist. How do you reconcile all these roles?

I started curating exhibitions in 1999, when I was still a student at the History and Theory of Art University in Bucharest and during this experience, I became aware of the disfunctionality and shortcomings of the Romanian art market and tried to fix them, in my way, or change them in structure as much as possible. For ten years I wrote reviews about art exhibitions in publications ranging from Romania Liberă to Observatorul Cultural and other international or Romanian periodicals. I realized later that my reviews did not bring considerable improvement of indicators: increasing number of visitors of the exhibition, increasing interest for the artwork and of course a better knowledge of contemporary art and artists. The creative village remained the same, and sadly, with the same little known and undocumented artists. Only in 2009 did we changed the strategy, moving from art criticism to provide an area of information, promotion, documentation and archiving of the entire visual arts sector and related areas. With this new strategy Modernism.ro emerged in 2009 and since then we operate in the same formula: Cristi Farcas, Ciprian Voicu, Lucian Muntean, Oana Nasui and me. From the very beginning we did not consider it necessary to create another critic court which would have created hierarchies and values which could have choked the horizontal knowledge of the quantity of artistic production. We somehow started the other way around, democratizing public taste without imposing personal stylistic directions of cultural consumption, leaving the information about creativity free and diverse, whichever its forms and criteria of development – from kitsch to conceptual art.

The Art of Living magazine