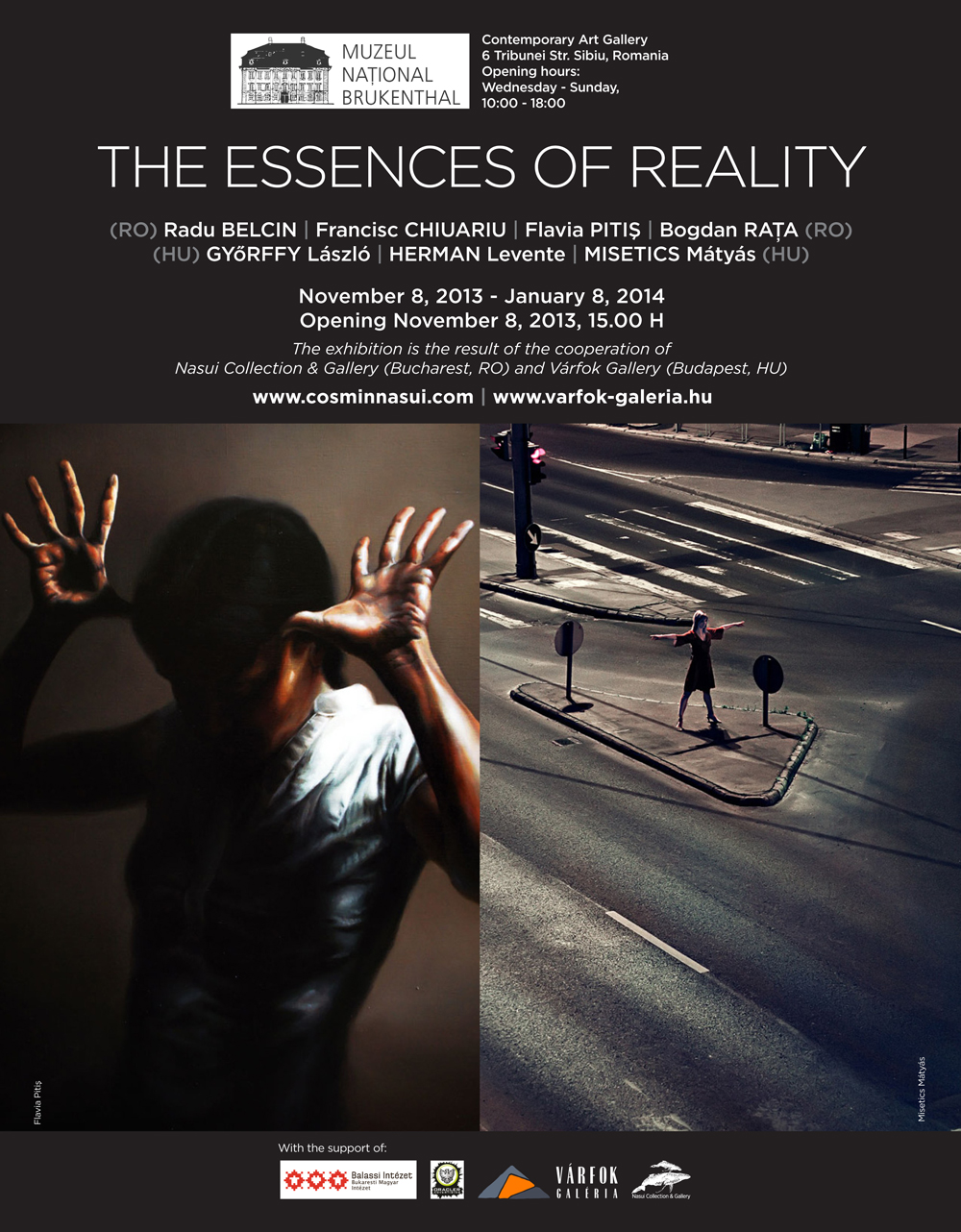 Sweets are offered by Madame Lucie.

Wine is offered by the the Hungarian Cultural Center in Bucharest.

The Essences of Reality is an exhibition project started as cooperation in 2012 between two private galleries: Várfok Gallery (Budapest, Hungary) and Năsui Gallery (Bucharest, Romania) in order to link the different contemporary artistic scenes within Central and Eastern Europe along a definite topic. The project started as a private initiative in the form of presenting first three Hungarian and four Romanian artists reflects a specific artistic tendency in the region focusing on the different layers of strongly actual and timeless reality. The exhibition was first shown during autumn 2012 in Budapest.

The conception of the exhibition offers the opportunity for various approaches of reality to deploy through different materia, each approach become a visual formulation of essential problematics.

Essence, essential, that is also substantial: how does one sense reality? Of reality’s innumerous layers, how many is one capable of interpreting, and are we talking at all about several layers of reality or is there only one to handle and to see across?

A common denominator evolving through the topic is that the exhibition, displaying Hungarian and Romanian artists of a younger generation, shows works which are interlaced with thoughts related to the artists’ past and identity. It is an East European cultural transection (meant to grow even wider in the near future) which unfolds in front of the viewer who is invited to wander in it and unravel the various essences of reality.

The determinative element of Radu Belcin’s (1978, Brasov / RO) paintings is the game of lights and shadows, i.e. chiaroscuro in which he places figures and objects giving them a new signification. The identity of his characters having neither faces nor personalities remains an enigma, but it is by researching these that the artist defines the new confines of present and reality.

The newest series of Francisc Chiuariu (1966, Sibiu / RO) catches within the common collective space the individual captured by his every days, his daily ’hurries’ and how in return the individual ’consumes’ this space around him. The painter will use typographic ink and oil painting on backlit to decompose reality hence analysing the postmodern process of the individual’s disintegration within collective life.

Human body can never be missing of László Győrffy’s (1976, Budapest / H) works: these usually depict mutant body parts living an independent life which reflect – placed in grotesque scenes – on human and on themselves, often making public their highly facetious inner life. The self-digesting, putrefying heads represent one of Győrffy’s layers of reality while the body parts levitating in ’nothingness’ and the ’suicidal’ artworks question our existence and its meaning.

The motives determinating some of Levente Herman’s (1976, Tārgu Mureş / RO) series – looking back at the recent œuvre – trace out a kind of personal iconography. His works do not aspire to a ’realistic representation of reality’, but offer another world impregnated with memories kept of reality. If his characters do take a human shape, one will just meet clothes hovering like ghosts which personality and presence confront us with an inevitable force while the monochrome-like surfaces and silky nuances enlighten the essence.

A basic element of Mátyás Misetics’ (1982, Budapest / H) photographs is light, artificial light. His works depart from the dark, and only the sources defined by the artist will emphasize the figures and the scenes. The alienation of man and the quality of his relations are recurrent topics in his works, but his œuvre mainly experiments the new possibilities of modelling with light – ’photo-graphing’ – to reveal new layers of reality by enlightening it in unusual ways.

The paintings of Flavia Pitiş (1978, Făgăraş / RO) do not depict reality but aim to transplant to the present what is missing of reality. Pitiş usually represents her subjects isolated, hence confronting them with their solitude. Darkness can be interpreted in her works as the equivalent of the immaterial, while her sensitive tracing foreshadows something indefinable, suggests a mysterious presence. Quietude, soft moves emanate from the works which search for the identity of a future generation.

Bogdan Raţa (1984, Baia Mare / RO) explores an innovative post-humanist area with the help of genetic forms taken out of human anatomy. Raţa recreates and multiplies these parts by offering them new lives in new ’bodies’ which seem to be the results of laboratory experiments. The industrial elaboration of his sculptures refers to contemporary infirmity, i.e. the fading of the individual (and personality) but the colourful surfaces also presume the recent use of the body as a toy-like object.

These approaches and tendencies become a sort of key to understand some of the essential matters of our reality, and the sometimes whispering sometimes exclamatory or derisory voices invite the viewer to explore new layers by discovering and understanding unusual pictorial compositions.

The Budapest exhibition, followed by the Sibiu show prepare the next, that is third stage of this international project series willing to embrace four countries at the end: The Essences of Reality is meant to become a travelling exhibition presented later on in Poland and Czech Republic in 2014-2015 with the cooperation of Polish and Czech artists. The Polish Institute in Romania, as well as the Romanian Czech Institute are already supporting the project.

Várfok Gallery is one of the first private contemporary art galleries in Hungary – founded by Károly Szalóky in 1990 – that has been able to function continuously to this day.

By representing an international set of guidelines for galleries and by mediating fine arts of high quality, the gallery operates as a program-gallery. The gallery single-mindedly persists in its program to present the important values of contemporary Hungarian art, and to reveal its exciting trends and aspects. By its strictly contemporary profile and value-centric outlook, the gallery purports to assist the creation of new works of art and to facilitate their presence on the contemporary art market. The artists shown belong to a permanent circle and represent different generations, from the Hungarian neo-avantgarde or other Hungarian and international artistic currents of historical significance to the progressive tendencies of painting or photography.

Nasui Collection & Gallery is a cultural operator presenting the most important premium creations of a carefully selected pool of Romanian contemporary artists, within favourable international and national contexts. It aims to circulate its artists and art works on national and international art markets and scenes and to contribute to the sustainable growth of the represented artists’ market values.

Balassi Institute, The Hungarian Cultural Center in Bucharest, presents artistic manifestations in all areas of contemporary Hungarian culture, exhibitions, concerts, debates, theater shows, films, activities for children. The center has a library of over 8,500 volumes and a number of literary and cultural magazines.