“Princess” by Alexandru Bunescu in The National Bank of Romania Palace 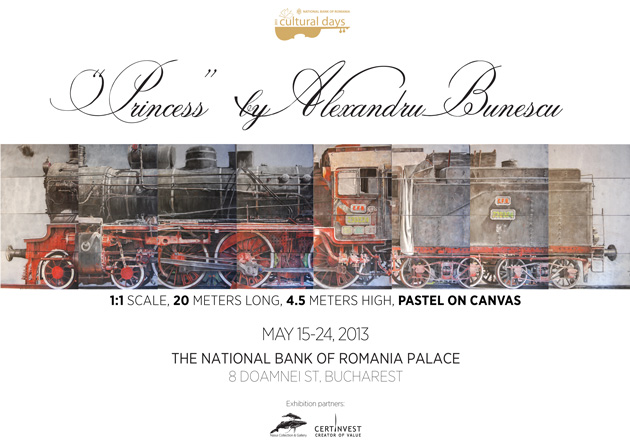 In the presence of His Royal Highness Prince Nicolae, we are honoured to invite you to the private view of the magnificent “Princess” by Alexandru Bunescu.

Further on, you are invited to an exclusive tour of the National Bank collection and palace.

“My Princess” is an artwork made by Alexandru Bunescu and represents, in full size, the steam locomotive that hauled the Royal Train in Romania, Europe. The locomotive is painted at 1:1 scale. The artwork measures 4.5 meters high, 20 meters long and is composed of 32 panels, each 1.12 m x 2.5 m, pastel on canvas.
This is the largest contemporary artwork in technical graphics, sold at auctions all around the world. Also, this unexcelled artwork qualified the artist, in 2011, in the top three Artprice’s list (the world leader in art market information) as one of the best-selling contemporary artists under 35 years old.
Alexandru Bunescu was born in Sibiu (Romania) in 1988, has a Master’s degree at the University of Art and Design Cluj-Napoca, Romania and was awarded the 2009 Erasmus Scholarship at Eugeniusz Geppert Art and Design Academy, Wroclaw, Poland. He had solo and group exhibitions in Romania, Denmark, Poland, Germany. Currently, he is preparing his PhD at Cluj University and works in Bucharest, Sibiu and Cluj-Napoca.

History of the Royal Train
The Royal Train was ordered by King Ferdinand to the Company Ernesto Breda from Milan, being completed in 1928. King Carol II, King Mihai I, Nicolae Ceausescu, but also foreign high officials such as Gerald Ford, Henry Kissinger, Leonid Brejhnev, Erich Honecker and Todor Jivkov, have traveled by it.
Today, the steam locomotive is still operational and can travel at a maximum speed of 65 km per hour. It has 9,000 horsepower, can pull 40 wagons and has automatic pilot.

After becoming property of the communist state after 1948, the train was also used by Gheorghe Gheorghiu-Dej and Nicolae Ceausescu. In the autumn of 1955, in the saloon-carriage of this train, Gheorghe Gheorghiu-Dej and Nikita Khrushchev held discussions related to the withdrawal of the Soviet troops from the territory of Romania. On August 6, 1975, Ceausescu traveled by the Royal Train accompanied by U.S. President Gerard Ford and State Secretary Henry Kisinger, on the route Bucharest – Sinaia. On the same day, at the lunch discussions organized at Peles Castle, it has been decided to award Romania the “Most Favored Nation” Clause. During hunting parties organized by Ceausescu, other state presidents also traveled by this train: Todor Jivkov, Leonid Brejnev, Erich Honecker. Ceausescu used the Royal Train until 1984, when he ordered a private coach railroad car, manufactured in Arad with Swedish materials.
Among those who rented the Royal Train is also the director Francis Ford Coppola: on one occasion, he took the train out on a shoot session at night, at Obor Station. The train was taken out from the depot and by the representatives of the famous brand Louis Vuitton.

The largest artwork ever auctioned

With the work Princess / 32 panels , the young Roumanian artist, Alexandru BUNESCU (born 1988) created by far the largest work that sold at auction during our reference period. Consisting of 32 panels Princess/32 panels is no less than 20 meters long! The auction house Artmark, which supports the artist, was not oblivious to the commercial and publicity interest that this record format represented and it promoted the canvas as the star of its sale with a very optimistic estimate of USD 70,000 – 85,000. This huge pastel representing a life-size train nevertheless sold (but well below the estimation) for USD 50,000! – The largest paintings (January 2011 – May 2012) – Artprice – THE WORLD LEADER IN ART MARKET INFORMATION

Alexandru BUNESCU takes third place in Top 10 auction results in 2011 for drawings by artists under 35 for a work that is no less than 20 metres long! Princess is composed of 32 panels and is possibly the largest artwork ever auctioned . Artmark, the auction house that supports the artist, clearly gambled on the “record” appeal of the work by placing it center-stage in a Contemporary Art sale with a very optimistic estimate of $70,000 – $85,000. But, the giant pastel drawing – representing a life-size train – sold well below its reserve price for $50,000! – Artprice – THE WORLD LEADER IN ART MARKET INFORMATION

A giant pastel entitled Princess by the young Romanian artist Alexandru BUNESCU (born 1988) already ranked among the top 10 results for Drawings by artists under 35 after it fetched $50,000 at Artmark in Bucharest on 13 April 2011. The same result gives the artist second place in this under-30 ranking. In both rankings Bunescu is followed by the American artist Tauba AUERBACH, who plays with our optic nerves in elegant and methodical compositions. – 30 under 30: drawing , Artprice – THE WORLD LEADER IN ART MARKET INFORMATION

In the second place in the ranking of graphic artists under 30 years – Romanians Alexandru Bunescu. We have already mentioned it a giant, 20-foot work, “Princess,” which is a train composed of 32 panels, an image in full size. In the ranking of the greatest works of art at auction for 2011 – the first half of 2012, this work won first place. In the current ranking, Bunescu goes second – with the same “Princess”, sold in Bucharest Artmark auction for 50.6 thousand dollars. – artinvestment.ru

“Princess” may persist in the history of art as the largest painting in the world that has ever been on public sale. But for now, it surely can be included in the Guinness World Records. – – ProTV Romania

“Princess”, artwork signed by Alexandru Bunescu, is a great work in all aspects, with unparalleled dimensions, 20 meters long with 4 and a half meters high, granted with 35,000 euros – Manuela Plăpcianu, CEO Artmark